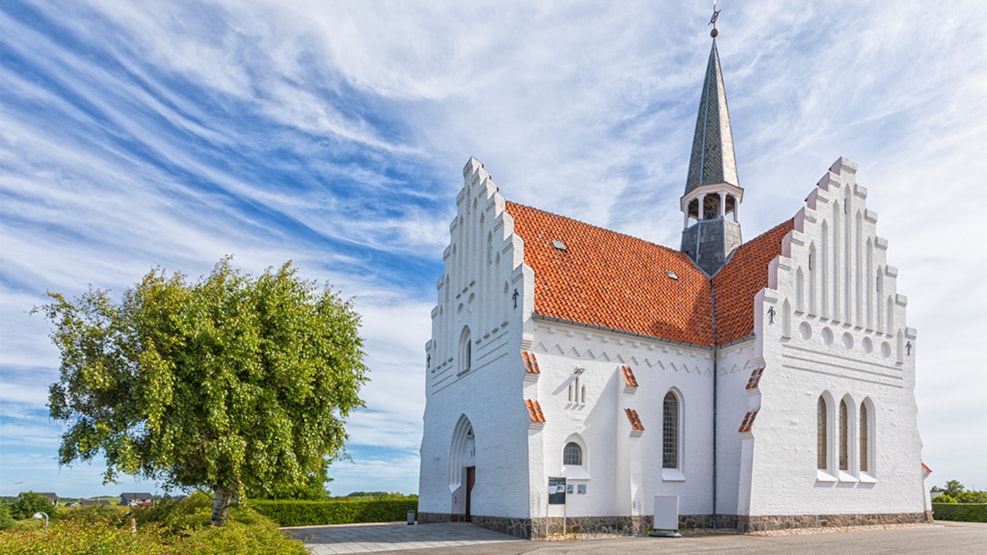 Langeland’s most recent and smallest church was built in 1920.

The ambition of having a church in Bagenkop came about gradually as the drainage and reclamation of Magleby Nor was taking place. Before this it was quite normal for the villagers of Bagenkop to sail to church in Magleby, but this could be a dangerous affair. In 1779 an accident occurred that really brought this home; a boat carrying a bridal party to church sank on the day of the wedding itself, and five people perished.

In 1851 the local Duke gave his permission for the building dykes around Magleby Nor to begin. This would give around 1000 “tønder” of land (a little over  550 ha.). Draining this land was first suggested by a prominent figure of the day, C. Harboe, however not everyone thought the reclamation project was a good thing. The fishermen in Bagenkop were very displeased, an area they had hunted and fished for centuries  was now gone.

It took another tragedy to occur before the desire to have a church in Bagenkop arose in earnest.  In 1908 four men, all family breadwinners, were lost when their boat sank. It now seemed a long way to the churchyard  at Magleby, and people wanted to lay their loved ones to rest close to the place they called home. A large part of the funds needed to build a new church was collected from the villagers, who also contributed to furnishing the interior of the church. After a minor delay, in the shape of the first world war, the finished church stood ready for use in 1920. An unusual local custom, which still persists today, arose amongst the men and boys from Bagenkop when a  memorial stone was erected to commemorate C. Harboe’s work on the dykes, whenever they walked past the stone, they would stop and pass water on it.