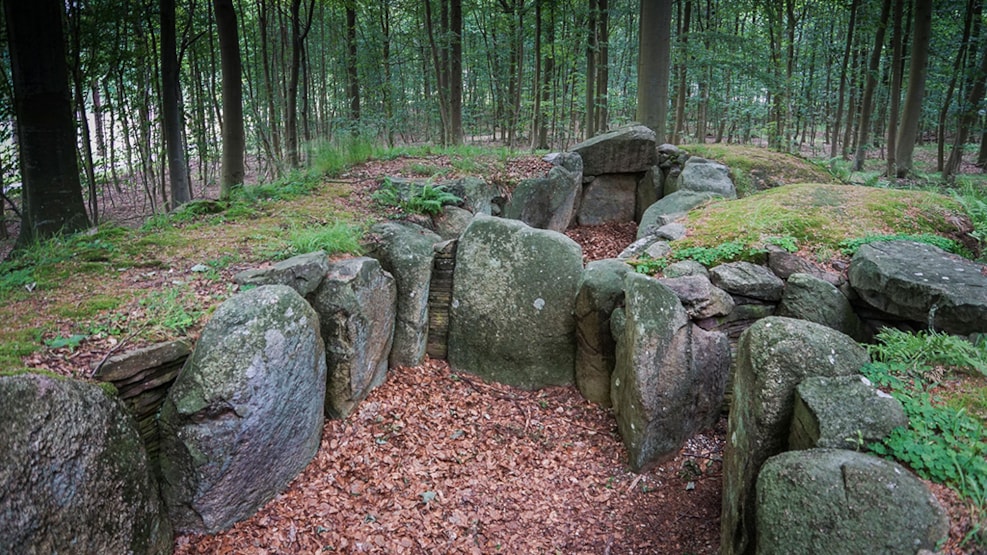 Finds of ceramics, flint axes and cross arrows as well as amber beads

The special ancient monument is well known under the name »Double-passage grave in Tvedeskov«. But to be perfectly precise, it is a twin passage grave. Double chambers typically consist of two more independent mounds with some high filling between the chambers. Our passage grave, on the other hand, has only one mound which contains two chambers, which in terms of construction are almost one chamber divided in the middle by a stone.

From each of the two chambers leads once out to the foot of the mound. There is currently no deck over chambers or hallways (with one exception). In that sense, the burial chamber lacks a significant part, consisting of the deck and the filling of earth and stone that once covered them. This means for us today that we can study the construction of the burial chamber here without having to crawl around in a pitch-dark chamber.

By 1875, both chambers were earth-filled. Even then, the cover stones were missing, and you could see two parallel entrances to the southeast. Two years later, the two chambers of the burial chamber were excavated by the National Museum's Henry Petersen for the count at Tranekær Castle. The finds were handed over to the castle and were part of the count's private collection. The ancient monument was again described in 1947 and registered in 1948, as a result of the general protection in 1937. In 1978, the chambers of the burial chamber and the area in front of the curbs at the mouths were examined by Langelands Museum.

Several flint axes and some pottery from the middle of the Neolithic were found in a semicircular area on top of and under a stone pack. The finds probably originate partly from sacrifices in front of the corridors and partly from cleaning up the chambers. In many places, traces have been found that indicate that during the period of use of the large stone tombs, the chambers were cleared to make room for new deposits.

It is interesting that pottery from the Late Bronze Age and Roman Iron Age was also found, and that fragments of pottery from an early part of the Late Stone Age were found under the mound itself. This means that the place has been used for religious acts for thousands of years. After the excavation, the burial chamber was restored and regained its present shape.

In 1995, one cornerstone was overturned and two supporting stones poured heavily into the chamber. A new restoration rebuilt the stones and ensured stability, among other things by inserting stainless steel bars. The drywalls were also restored and cleaned.