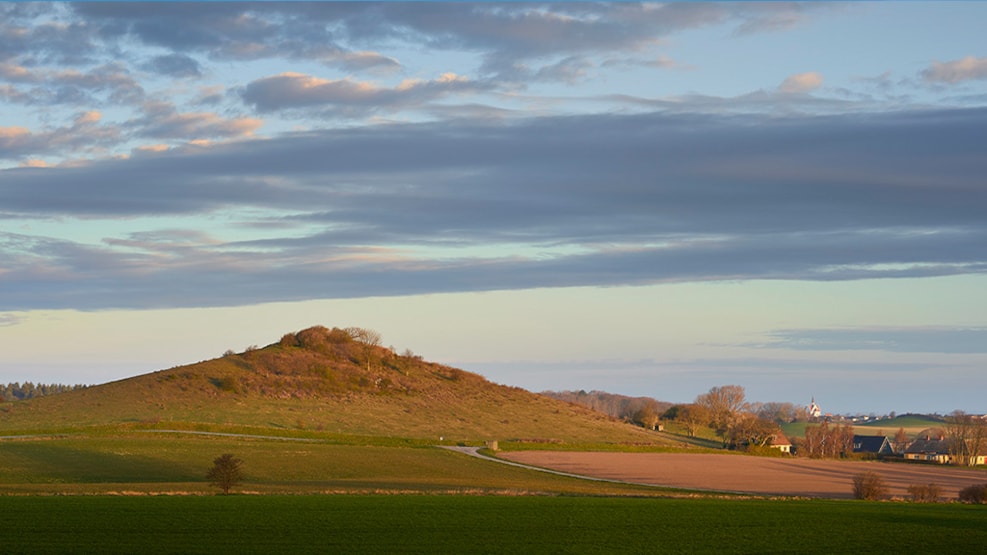 The landscape of Langeland is dotted with over 1,200 dome-shaped hills known as ’hat-shaped hills’.

The term was coined on a field trip about 100 years ago, during which a female geologist wore a so-called cloche hat, a highly fashionable article of clothing in the 1920’s.

Fakkebjerg, located two kilometres southeast of Bagenkop, stands at 37 metres. From the top of the hill, all of southern Langeland can be seen – and in clear weather, this extends to Lolland, Ærø, and the northern coast of Germany as well. At its base, Fakkebjerg has an oval shape of 370 by 200 metres, and it rises 30 metres above the surrounding terrain. From 1806 to 1905, there was a lighthouse at the top of the hill, which was succeeded by various radar installations from the end of World War II until 1972.

500 metres southwest of Fakkebjerg – on the spur of a smaller ‘hat-shaped hill’ – is the impressive barrow, Hulbjerg, a passage grave dating from the Neolithic Age. Here, by crawling through a long passageway, it is possible to visit the stone-built burial chamber, where at least 53 people, including 17 children, have been laid to rest. Among the things discovered in the burial chamber was a skull showing evidence of the only case of dental drilling known to us from prehistoric Denmark – a root canal made using a flint drill in order to the drain the pus from a gumboil. Tartar found in the access cavity tells us that the patient survived the procedure. 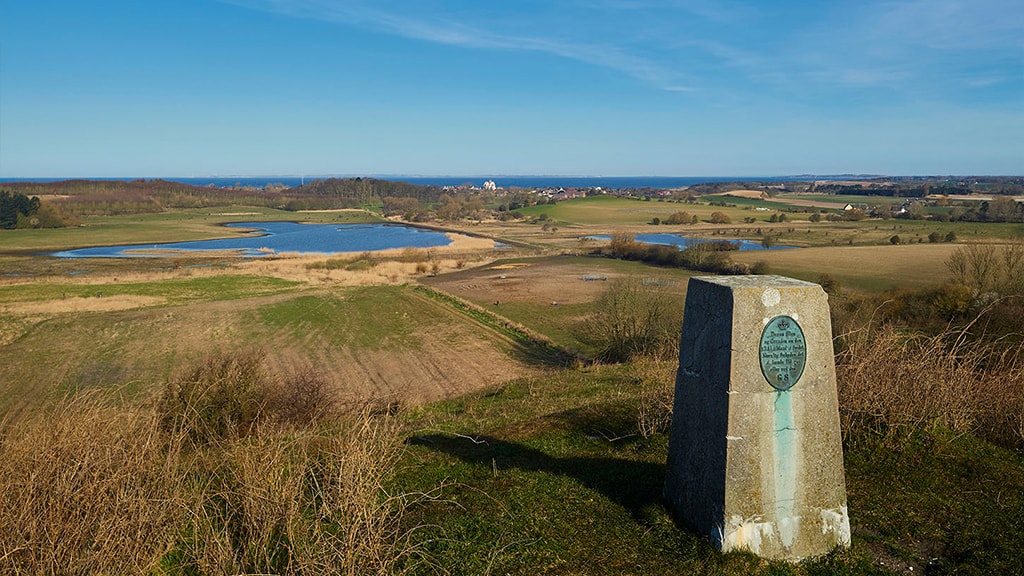 The Glacial Landscape and the ‘hat-shaped hills’

Precisely how the ‘hat-shaped hills’ were formed has long been a topic of debate among scholars. Recently, modern science has provided part of the answer to the puzzle.

About 17,500 years ago, Langeland and the Storebælt (Great Belt) region was covered by a tongue-shaped offshoot from the Bælthav Icestream known as the ’Storebælt Glacier’. When the glacier stagnated and its outermost parts became dead-ice, large networks of fissures appeared along the margins of the melting ice, and hollows formed on its the surface. These fissures and hollows filled with meltwater, forming glacial lakes.

Some of the material released from the melting ice was carried with the meltwater into the glacial lakes. Here, the water separated the different materials, which then settled as sorted layers of clay, sand, and gravel. Occasionally, unsorted layers of moraine clay-like or very stony material were deposited in the glacial lakes, particularly at times when the water level was low and landslides along the shore sent sluggish ’tongues’ of melt-out material into the lakes. At a later stage, the still active parts of the ’Storebælt Glacier’ pushed at the dead-ice and the glacial lakes, tipping over the accumulated deposits, which ended up in an inclined or vertical position. When the ice eventually melted away and the lakes disappeared, these deposits remained as features of the landscape, becoming the ‘hat-shaped hills’ as we know them today.

Due to varying conditions in the depositional environment, the different ‘hat-shaped hills’ have distinct internal structures. Those situated further inland generally contain fewer layers of moraine clay-like and unsorted stony material than those closer to the coast, for instance the ones located between Bagenkop and Dovnsklint. Moreover, the layers inside the inland ‘hat-shaped hills’ appear to have been more disturbed by ice push than the layers of those along the coast.

In between the ‘hat-shaped hills’, one finds low-lying even moraine plains, in places overlaid by small outwash plains formed by water flowing form melting masses of dead-ice and snowdrifts. 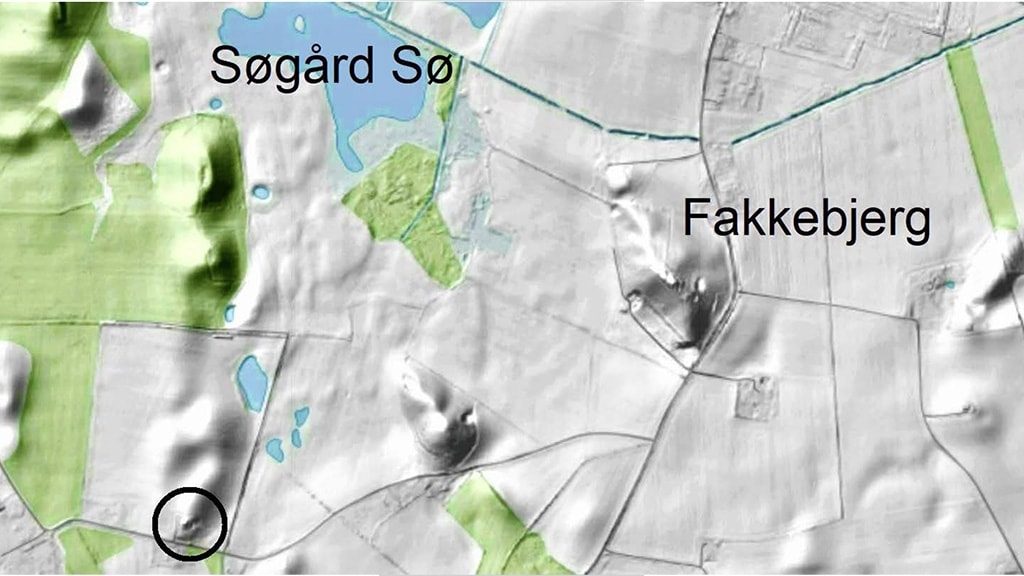 At the end of the last ice age, the flat, low-lying area to the west and northwest of Fakkebjerg was a moraine plain partially covered by small outwash plains. When the sea level rose, creating the South Fyn Archipelago, so did the level of the ground water, and fens and minor lakes formed in the hollows of the landscape. Later on, the area was flooded by the sea and transformed into a branching fiord system, which included the coves Lundenor, Magleby Nor, Klise Nor and Søgård Lake. The fiord reached all the way to the foot of Fakkebjerg, which at the time was located by the coast. In 1853, the area was embanked, and the fiord was drained.