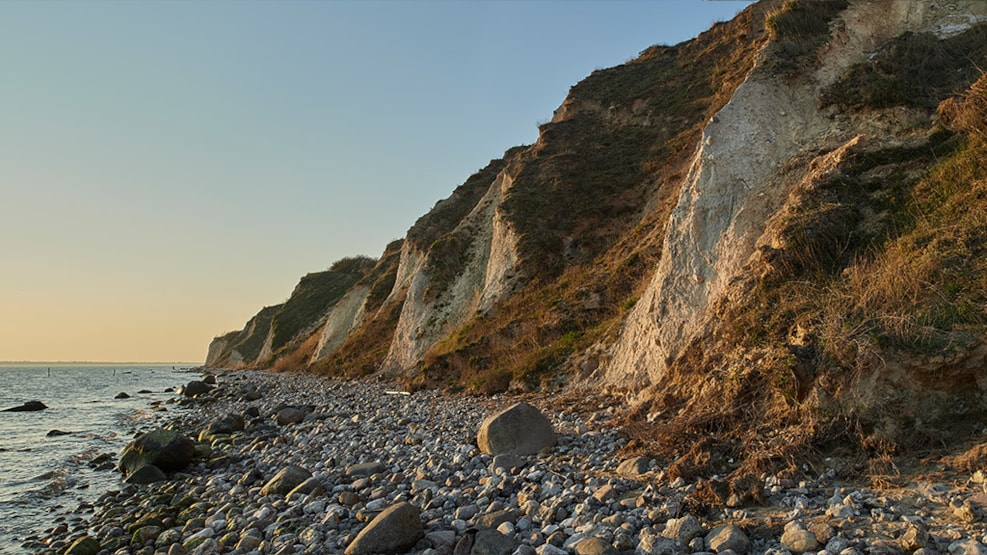 Ristinge Klint (‘Ristinge Cliff’) in the southwestern part of Langeland is a world-class example of how an advancing glacier can dislocate and exert pressure on different deposits in front of the glacier.

The cliff, which dominates the coastal landscape on the Ristinge Peninsula, is two kilometres long and
28 metres high. It invites visitors to go for a stroll along the beach, where they will come across many different types of rock, or along the upper edge, which offers magnificent views.

Ristinge Klint contains lake and marine deposits from the last interglacial period, the Eemian (130–115,000 before present), as well as layers representing four different ice advances during the last ice age, the Weichselian (115–11,700 before present). Additionally, remnants of moraine clay dating from the previous
ice age, the Saalian, have been discovered in a few places. As such, the cliff holds great significance for research, education, and popularization of the history of the landscape and the environmental changes taking place over the last roughly 140,000 years.

The cliff can be accessed from several different parking areas. 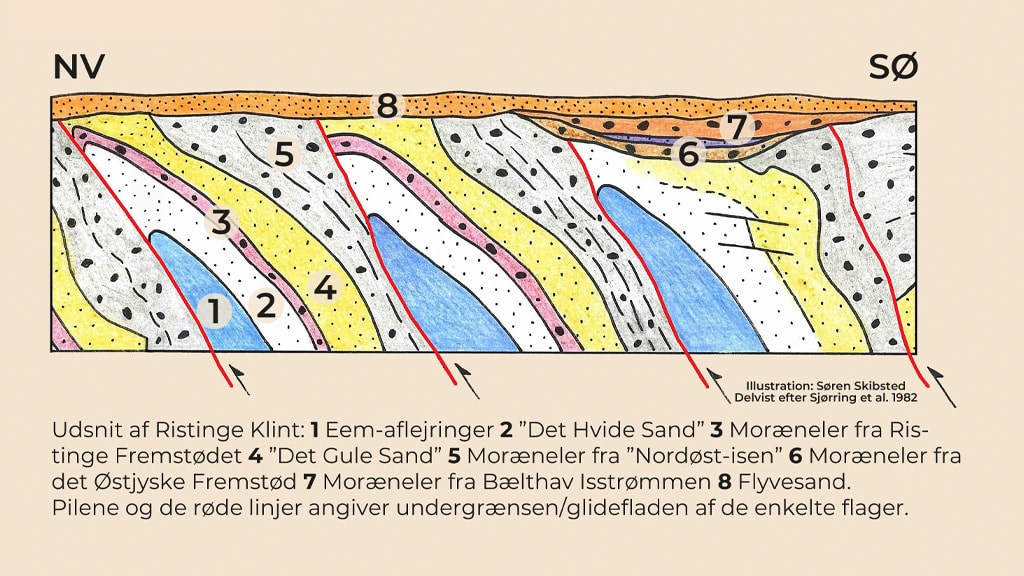 The Glacial Landscape at Ristinge Klint

The oldest deposit consists of ‘sticky’ clay (‘The Shiny Clay’) deposited in a lake basin early in the Eemian period. Following that is a thin layer of freshwater sand interspersed with snails and mussels.

Then comes a layer of marine ’Cyprina Clay’, which contains a large amount of clam shells. The clay is named after the clam Cyprina islandica (now Arctica islandica) – also known as the Molbo Oyster. The Eemian layers indicate that the area south of Fyn was once home to lakes that were later flooded by the sea. During the Eemian, the sea level was 7–8 metres higher, and the temperature 3–5o C higher than it is today.

The oldest Weichselian deposit is ‘The White Sand’, consisting of almost pure quartz sand deposited by water and wind on floodplains with shallow lakes under arctic conditions in a permafrost environment. 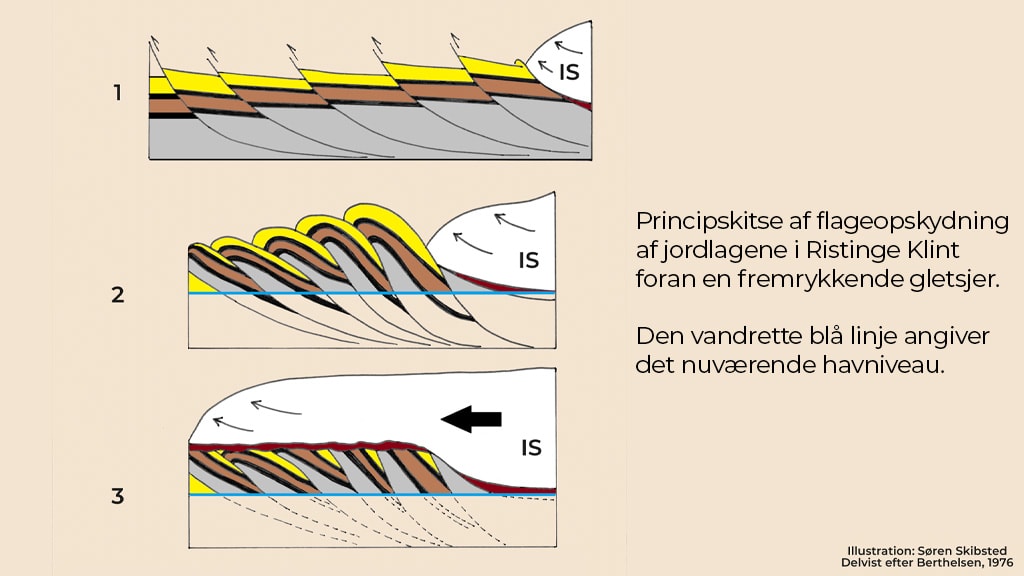 55–50,000 before present, an ice advance from the southeast, the Ristinge Advance, deposited a thin layer of reddish-brown moraine clay.

Following a ’gap’ in the sequence of layers spanning several thousand years, the ’Yellow Sand’, was deposited on outwash plains in front of the advancing ’Northeast Ice’ (23–21,000 before present). The ice deposited a thick layer of grey moraine clay with glacial pavements (horizons of striated blocks). Today, the moraine clay forms the characteristic ’noses’ protruding from the cliffside.

Then followed the East Jylland Advance (19–18,000 before present) from the southeast. The advancing glacier broke loose the frozen layers of soil in front of the glacier, rendering them into thick slices along slip surfaces in the ’Shiny Clay’ and forcing the layers upwards at an angle, producing at least 38, so-called imbricated, floes. As the glacier subsequently advanced further across the area, the ice planed off the top of the floes and deposited a horizontal layer of moraine clay on top of them.

Finally, the Bælthav Ice Stream (18–17,000 before present), from the southeast, draped yet another layer of moraine clay over the hilltop. The latter two ice streams also ‘dragged’ the landscape at Ristinge into an oblong shape along a southeast-northwest axis – a so-called drumlinized hill. At the top, the cliff is covered by sheets of windblown sand of a more recent date. 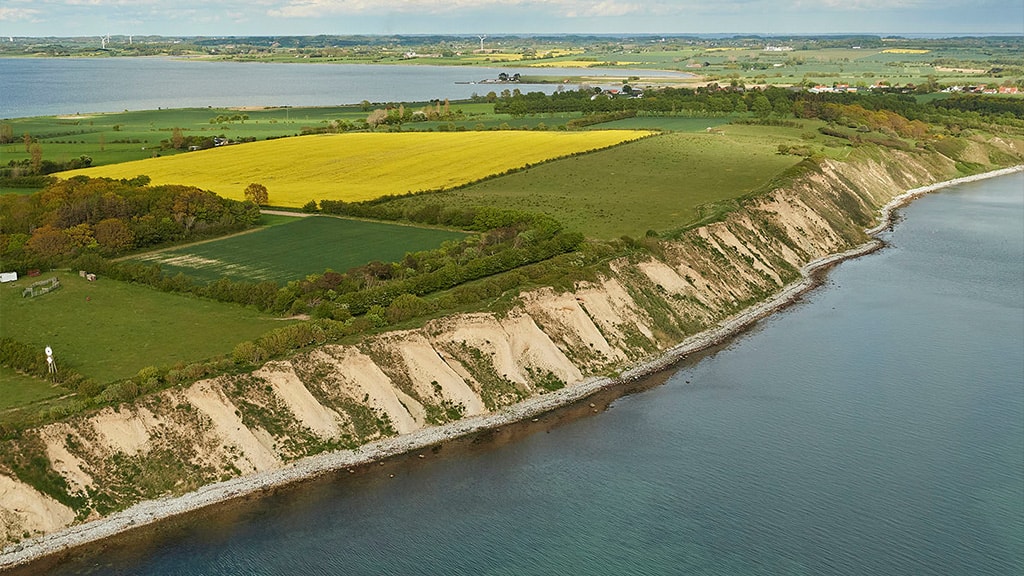 Following the formation of the South Fyn Archipelago, Ristinge Peninsula was an island separated from Langeland by a narrow sound. The sea eroded the coast, eventually giving rise to the cliff, from which the littoral currents carried loosened material to calmer areas where it was deposited to form new land, so-called marine foreland. Over time, Ristinge Peninsula merged with Langeland, while the northern part of the sound turned into a small cove, Ristinge Nor. In 1873, the cove was reclaimed, but attempts to cultivate the land met with limited success. During both world wars, the area was dug for peat.

Off the northern tip of the peninsula, Ristinge Hale is continually expanding as a marine foreland with beach ridges, salt meadows, beach lakes, and recurved spits.

Southeast of Ristinge Klint, a marine foreland at Ristinge Beach is covered by the largest dune field within the Geopark - three kilometres long, 100 metres wide, and up to 7.5 metres high.