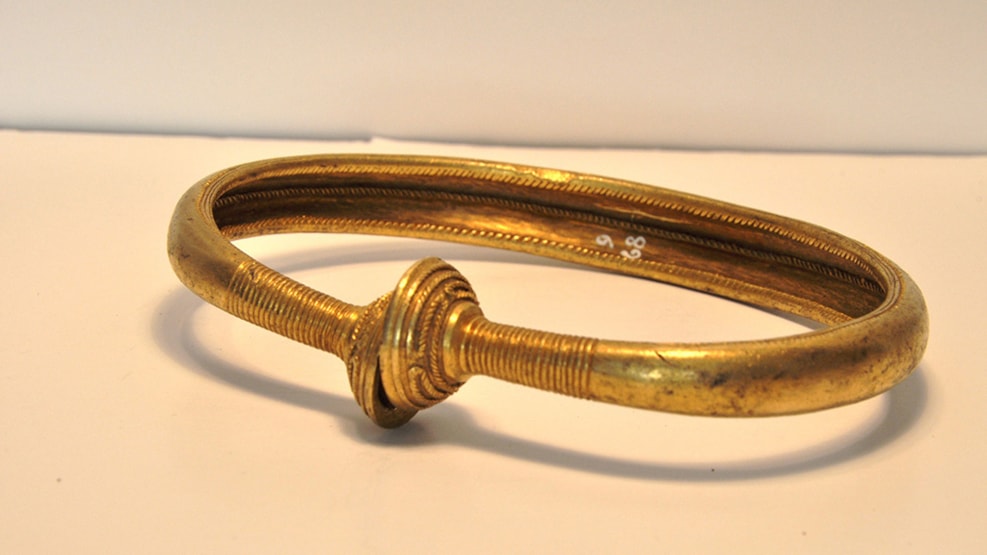 Golden bracelet from Grave hillocks at Tryggelev Nor

The bracelet in gold appeared in 1968 and came to Langelands Museum in 1977.

From the mounds there are only a few finds - in one of the loops a stone heap was found in 1876.
But in a gravel pit in Tryggelev Nor not far from the mounds, a very special object from the Bronze Age was found in the 1960s. That the discovery came one day was mostly a coincidence - or maybe it was due to the Danish school system?

In 1968, 12-year-old Ann-Gitte Christensen sat with her class at Humble Central School and watched a film about antiquity. Among the items on display were various pieces of jewelry from the Bronze Age. When a so-called Edsring - a bracelet probably used by men - appeared on the screen, Ann-Gitte exclaimed: "We have one like this at home!"

The ancient teacher, Gudrun Hansen, asked the girl to take it to school so she could show it to the director of Langelands Museum, Hakon Berg. When he got to see it, the amazement was great. It was a shiny shiny Edsring in the purest gold. It turned out to be the girl's father, driver Thorkild Christensen, who had found it in a gravel pit in Tryggelev Nor. He had thought it was fine and taken it home, but put it in one in a drawer and forgot it.
For three years it had been lying around waiting to be found.

We can read the story of Ann-Gitte and the ring in the local newspapers from that time.
They also wrote about the question that interested the locals the most: Would the small museum in Rudkøbing be allowed to exhibit the ring as a loan from the National Museum? It was so-called "danefæ" (treasure trove), and as such had to be handed over to the National Museum.
The result sadly was that the gold jewelery was initially to remain in Copenhagen. The security measures at Langelands Museum simply did not live up to the requirements.

It was with great joy ten years later when the newspapers could report that the National Museum had given Langelands Museum permission to exhibit the oath.
A smiling museum director, Jørgen Skaarup, said that the beautiful piece of jewelery would have a prominent place in the museum's new arrangement of Bronze Age objects. The term swearing is actually misleading. It originates from the great ancient scholar C. J. Thomsen who in the 1830s believed that the oath rings could be dated to the Iron Age, and that those that had been used in taking oaths.

Ed rings
Eds rings have been found in and around bogs around rich Bronze Age areas, where they may have been laid down in connection with religious rituals. They are also found in tombs from the Bronze Age. The Edsringen from Tryggelev Nor can be seen in Langelands Museum's ancient exhibition at Jens Winthers Vej 12.