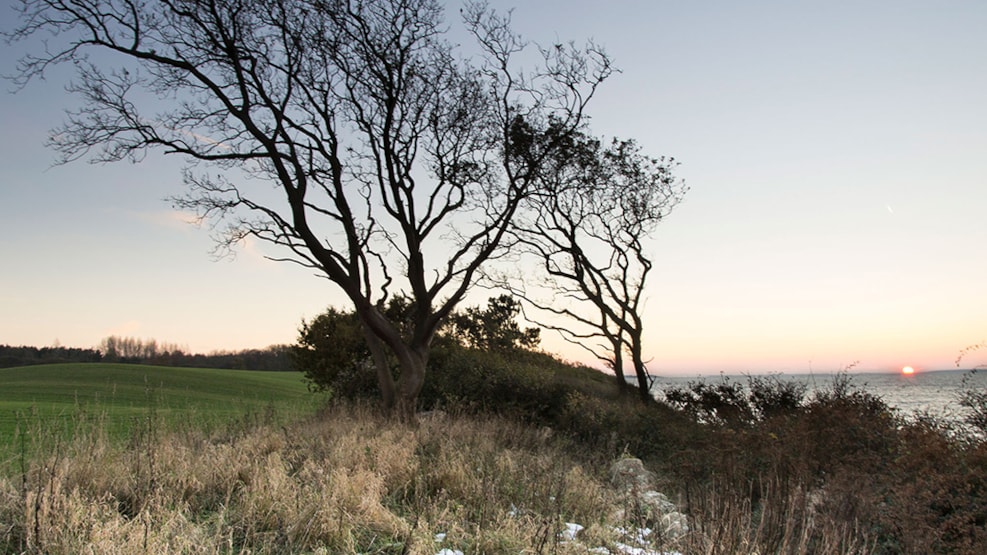 The long dolmens location is right beside the water on the west coast of Langeland.

One of the most beautifully situated ancient monuments on Langeland can be found here, 200 meters south of Helletofte beach on the west side of the island.

Perfect sunset moment
The long dolmen is right down to the water's edge. From here one can watch the sun go down into the sea.
Just south of dolmen there are tables and benches where you can rest and enjoy your packed lunch - if you are out hiking along the archipelago path between Lohals and Stengade beach (and on to Rudkøbing) which passes a few meters from the dolmen.

The long nozzle is also in itself even an impressive structure - 34 meters long, 8 meters wide and 1.8 meters high. Some wind-blown trees contribute at dusk to the romantic-dramatic mood as have often been associated with the dolmens.

1875
During the voyage in 1875, it was noted that the curbstones were of considerable size, however that many were blown up. And that there had been three stones at each end, but that only 2 in it southwestern and one at the northeastern end were preserved. In 1920, the National Museum performs a partial restoration of the dolmen, both of the mound and especially the curbs. You find also two depressions, two meters in diameter, probably after chambers removed.

1922
In 1922, the long dolmen is registered through an agreement with the owner of the field, owner Chr. Johansen, Eliselund. Both in 1947 and in 1982 it is noted that the dolmen is overgrown by a impenetrable bush of blackberries and beaten.

A note from the last voyage also tells a little bit of social history: "Intended for grooming for employment work in 1983."