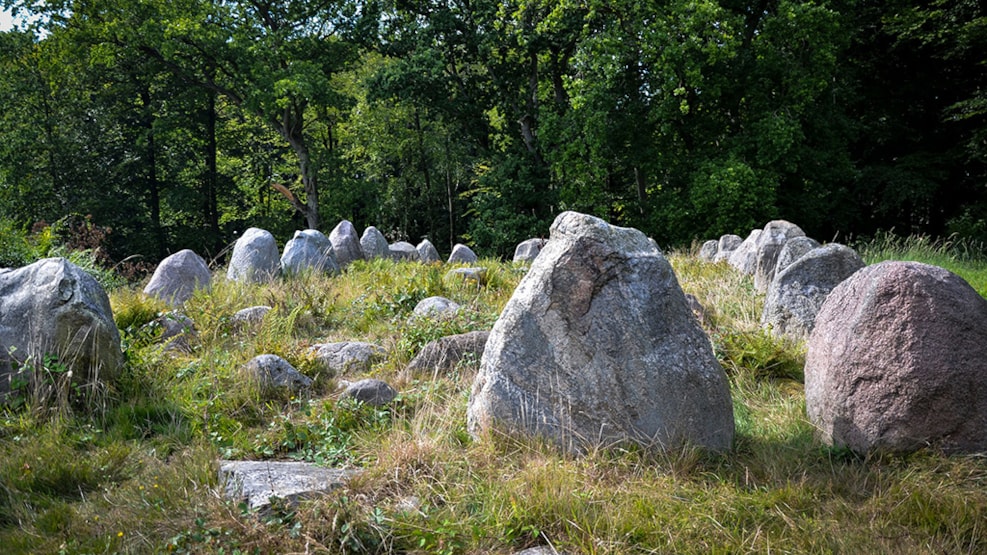 In a clearing in the forest a little north of the Nedergaard Estate, 500 meters from the beach, lies the long dolmen.

Its extent is marked by the beautiful, almost complete row of curbstones: 20 meters long, 8 meters wide and oriented east-west in the longitudinal direction.

Today, the long dolmen is an impressive sight and not at all to be mistaken for by the one who comes by it. But it was not always so.

1875
When the National Museum visited the place on one of their county travels in 1875, they found that "Here is perhaps a long dolmen" but it was so overgrown that a more detailed description was impossible.

1903
In 1903, after what is referred to as "miscellaneous removal of curbs and chambers", the ancient monument is registered by the land owner, chamberlain, court huntsman G.V. Kaas to the family house Nedergaard.

1947
During the National Museum's registration trip in 1947 - as a result of the general protection law from 1937 - the dolmen is described as "overgrown". Most curbstones have been overturned and it is noted that the dolmen should be restored.

1953
The restoration takes place in 1953, when the National Museum's people put 27 curbstones back in place. On the same occasion, within the curbstones, one could see "rows of stones without a specific system" and a chamber without the cover, as well as two depressions without chambers, but with a single supporting stone. The description must indicate that the entire ancient monument then after the restoration appeared in the same fine condition as today.

30 years later, status quo!
The Danish Forest and Nature Agency's employee twice searches in vain for the dolmen. Only the third time does it succeed, despite "the dense blackberry bush which completely covers the high area and makes the chambers almost invisible."

This little story should make it clear that the ancient monuments that still stand here today, do it thanks to a tenacious efforts by several bodies the last two centuries. If they are to be preserved for future, a lot of work will also be required in the future.