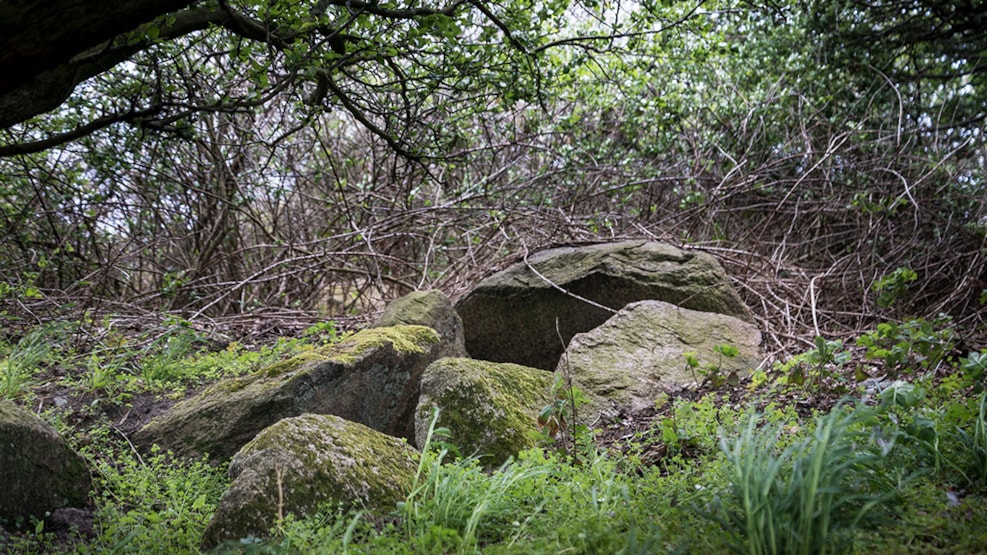 The long dolmen at Pæregård Beach is exposed close to the edge of the cliff.

Many of the dolmen and burial chambers on Langeland are unusually beautiful in the landscape. Several also have a fantastic view - but no one has such a spectacular location as the long dolmen at Pæregård Beach.

Today we can see that the northwestern curb stone is located half a meter from the slope. Today, more trees grow on the mound. It is usually not beneficial for roots to dig into the mound, but here it is probably the root network that holds the mound together and for the time being prevents it from slipping out.

In 1875 it could be seen that the three chambers of the dolmen were disturbed and that there was no cover left. In contrast, most curb stones were preserved, more than 20 on each of the two long sides. In 1947 the traveler recommended that the dolmen be restored, and in 1951 the Langeland Museum at Hakon Berg embarked on a major excavation, which was followed by a restoration.

While working on the excavation of the best-preserved chamber, the museum's people found an almost intact burial layer - on top of which a skeleton rested on its back. During investigations carried out by the Anthropological Laboratory in Copenhagen, it became clear that it was a young woman. This could be seen in, among other things, the pelvis and skull shape. A "major defect" in the back of the head, according to the anthropologist, most closely resembled the effects of weathering. However, he could not completely rule out that the injury had been inflicted while the woman was alive and thus had 'caused the death'.

Beneath the fairly intact skeleton of the young woman, the excavators encountered a bone heap with many bone fragments. Together in the heap, the anthropologist was able to find 18 sacrums - and conclude that there were at least 18 individuals. Another sacrum was found elsewhere in the chamber. The study of the bone material from the long dolmen at the edge of the cliff can thus tell us a little about burial customs and rituals in the Neolithic - if only that bones from several individuals have been placed in the same grave or monument. But also some aspects of the everyday life of the Stone Age people are elucidated by a study of the bones.

Both the first study in 1956 and the second in 1981 looked at a lower jaw. In the first report we can read about “1 lower jaw with strong atrophy [shrinkage] of the jaw as seen when teeth are lost early in life.” The second report states: “There are no teeth present. All the cheek teeth are lost and the root holes closed while the person was still alive. ”Two brief formulations that tell us something about life have not been simple or painless for the people who lived a little over 5,000 years ago.

Today we can say with some certainty that the Langelander here has not been a unique case. With the transition to an agricultural society also came a change in diet. Carbohydrates from grains occupied a larger place in the diet, with far more cases of caries as a result. Finds from the Hulbjerg burial chamber tell that the Stone Age people tried to find treatment for the disorder.

On a lumbar vertebra from an adult, anthropologists found traces of another disorder that became far more prevalent in the new peasant society. The 1981 study uses the formulations "osteophyte formation" and "Smoral impressions" - and summarizes: "These are typical osteoarthritis changes." In 1956 it is stated concisely: "1 vortex with severe arthritis changes." which suited the human body far worse than the varied use of the body in life as a hunter and gatherer. Osteoarthritis of the lower back is a typical consequence of the heavy, monotonous work in the field.