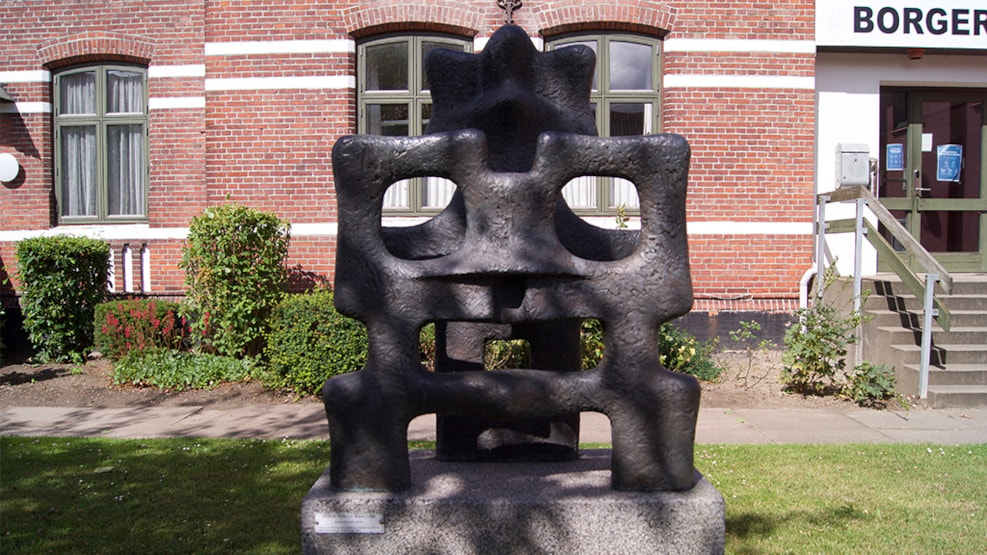 A mask like and totem inspired sculpture by the Danish sculptor Sonjas Ferlov - a remarkable figure in Danish art history.

In the front garden of Rudkøbing’s Borgerhuset, a bronze sculpture stands to welcomes you. It is far from being a classical bronze statue however, and you may have to stand and look at it for a while before the different elements transform themselves into something recognisable.

The work is called ‘Mask and Figure’ and was created in the years 1977-1984 by the Danish sculptor Sonja Ferlov Mancoba.

The sculpture takes the form of a double figure, which is typical of works by Sonja Ferlov Mancoba, and consists of a number of different elements that are all in dialogue with each other.

In the case of this work one figure stands behind the other, towering over it and holding it forward. The front figure takes the form of a mask, with two large holes representing its eyes and an elongated rectangular shape acting as its mouth. It is a very compact, rigid and forthright composition, which is also very characteristic of her work. It gives the sculpture a rather inhuman appearance  - they are indeed masks, stylised faces that can be universally recognised - and in reality this perhaps raises it slightly above the human level.

Sonja Ferlov Mancoba (1911- 1984) began her career as a painter, but she developed an interest in sculpture as early as 1935. She made her artistic debut in the autumn 1935 ‘Exhibition of Surrealism’ in Odense. The following year she moved to France, where she spent the most of her life. Here she met her future husband, the South African modernist and avant-garde artist Ernest Mancoba. In 1946 they had a son Wonga, who would also go on to be a respected artist. During the late 1940s they lived in Denmark for a short period, during which time Sonja Ferlov Mancoba became affiliated with the CoBrA artists’ association and strengthened her friendship with Asger Jorn. However the couple experienced much blatant racism within Danish society and therefore soon moved back to France.

Sonja Ferlov Mancoba developed a particular interest in African cultures. Here she found an art form that expressed the same cohesion between people that she herself fought for.

During her lifetime Sonja Ferlov Mancoba achieved a great deal of recognition within artistic circles, and was admired by colleagues such as Asger Jorn, Ejler Bille and Richard Mortensen, but she was regarded more as an “artist’s artist” and was never particularly well know amongst the general public.

Mask and Figure was her last mask sculpture and was completed in 1984, which was also the year that Sonja Ferlov Mancoba died. The work was donated by the Albani Fund in 1987, to mark the occasion of Rudkøbing’s 700th anniversary as a market town.