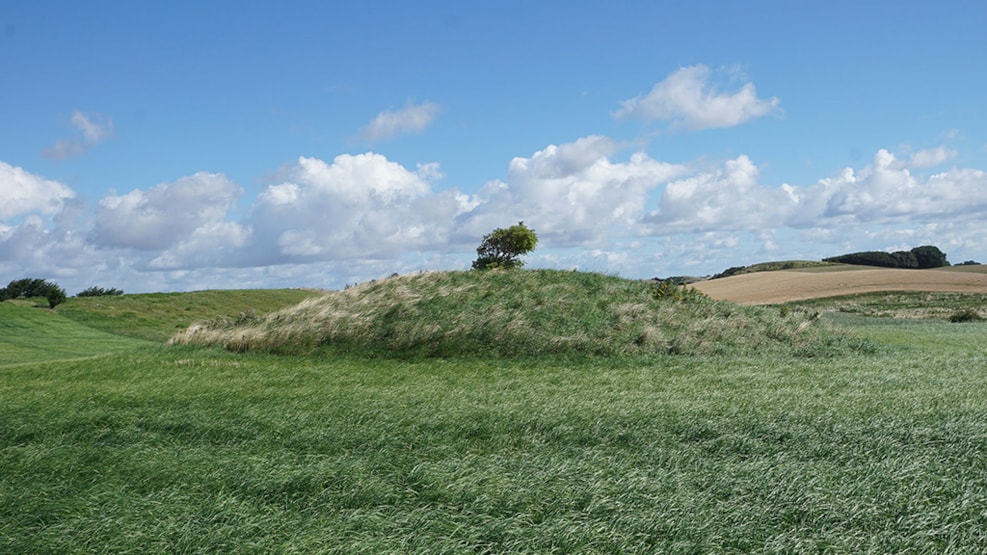 The graveyard is today located in cultivated land. 5,000 years ago there were at least 7-8 large stone tombs in the area.

The passage grave is located on the 16.6 meter high mound Myrebjerg north of Bagenkop.

During the manor visit, Henry Petersen was able to establish that the cover stones had already been removed. In 1877, Petersen excavated the burial chamber for the then owner, County Count Ahlefeldt Laurvig in Tranekær. The objects found were incorporated into the collection at Tranekær Castle and can no longer be identified. According to Petersen's list of finds they included (among other things): two flint axes, two flint daggers, a heart-shaped arrowhead and three hammer-shaped amber beads.

In 1950 the burial chamber was again examined, this time by Langelands Museum by Hakon Berg. In the introduction to his excavation report, Berg writes that the burial chamber after the survey in 1877 was protected by the county, but "around the turn of the century a part was dug in its southern part of the area's own people, one of them told during the survey in 1950 that he had been digging; it was the gold treasure that H.P. so obviously had searched for that enticed '.

Berg's study was primarily aimed at the construction of the burial chamber and revealed that the mound was built on an artificial elevation of clay and stone packs. The burial chamber is laid out in a square mound and has relatively small curbs. It is typical for a number of burial chambers in southern Denmark and is probably due to connections to the northern German area.