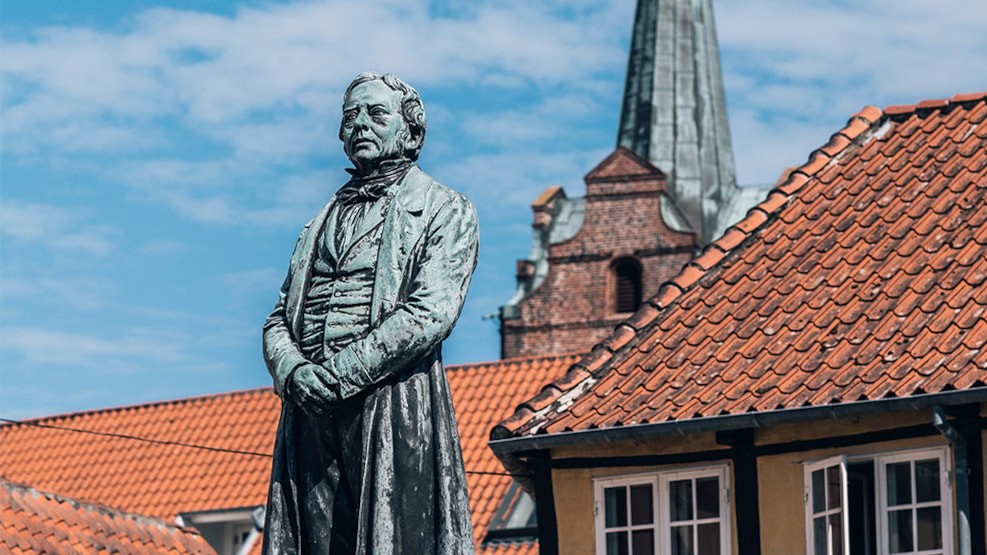 The statue pays tribute to the world-renown scientist H.C. Ørsted, who was born here in Rudkøbing.

The statue was erected in 1920 to mark the centenary of H.C. Ørsted’s greatest discovery, the connection between electricity and magnetism, which he chose to call electromagnetism. The statue in Rudkøbing is a cast of H.W. Bissen’s original bronze statue created in 1851, which stands at the Polytechnic Institute in Copenhagen.

It is not by chance that this statue stands on Gaasetorvet in Rudkøbing, it was right here that H.C. Ørsted was born and raised, the son of one of the town’s pharmacists. It was due to his father that he developed an interest in chemistry from an early age. But at this time there were only four field’s of study at the university, so he chose to study pharmacology, which was the closest thing to chemistry. But, as fate would have it, it was within the field of physics that he made his greatest discovery, one which would make him world famous.

Due to his groundbreaking scientific work, H.C. Ørsted was appointed Professor of Chemistry and Physics at the University of Copenhagen. He also used his great influence to help start Denmark’s Polytechnic Institute, which is today known as DTU, where he acted as rector until his death in 1851.

Ørsted had many other interests in addition to chemistry and physics. He was very engaged the the cultural life of the time, and was well acquainted with many influential figures of his day, such as H.C. Andersen and Oehlenschläger. H.C. Ørsted was also very interested in the Danish language, he wrote poetry and reviewed literature, and is thought to be the originator of around 2,000 words in the Danish language, many of which are still used in everyday speech today.

The Danish sculptor Bissen was a contemporary of Ørsted. He started his artistic career as a painter before later becoming a sculptor. He spent 10 years in Rome with his fellow Danish sculptor Thorvaldsen, working as an assistant. Back in Denmark he himself employed over 100 apprentices and assistants. He created a large number of national monuments around Denmark and statues of famous Danish citizens. His most famous works are  “The brave soldier” in Fredericia and the “Isted Lion” in Flensburg.

There are two versions of this statue. The original, which dates from 1851, stands at the Polytechnic Institute in Copenhagen, while this example was erected in 1920 to celebrate the centenary of the discovery which made H.C. Ørsted famous.