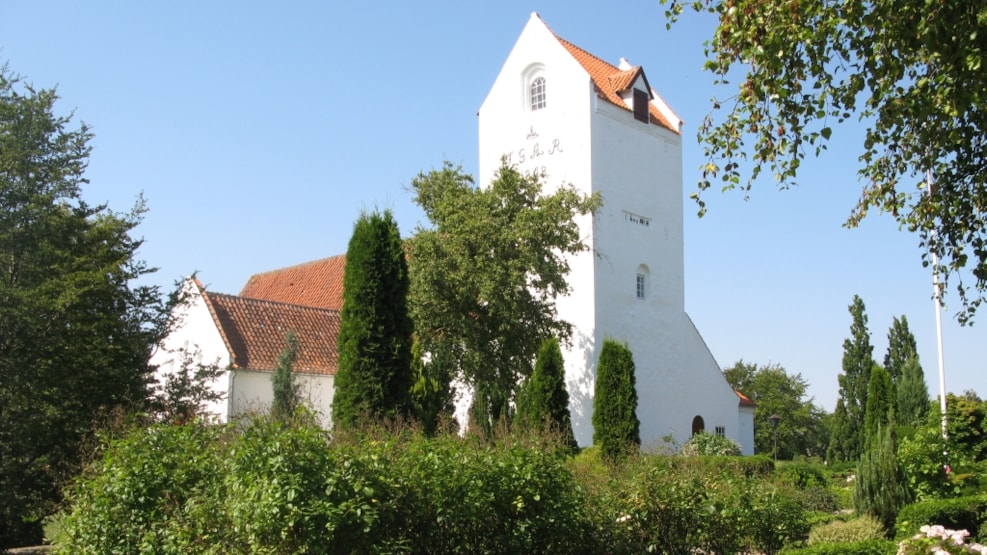 In Stoense, up in the north of Langeland, stands this fine church, which started out as an annex to Snøde Church. The church is open durning the sextons working hours.

It is believed that this church was originally built in the middle ages, but was extended to the west and had vaulting added in 1600. When this remodelling was done, a tower was also added . Rather unusually, the tower was built over the chancel. Another unusual fact is that it is unknown who built the tower; on the east side of the tower the year 1600 and the initials NH and HH can be seen, but it is not know with any certainty to whom these initials refer to. At the end of the 18th century a further extension was built, this time towards the north. It is still possible to see traces of some of the churches original features, such as the bricked up north door inside the church, and the outlines of arched windows in the walls.

The church has a beautiful, intricately carved altarpiece showing the Holy Sacrament. All twelve disciples can be seen gathered around Jesus in the center. They are all depicted with individual and very distinctive features. The church also houses a handsome pulpit, dating from around 1635, that is beautifully carved with scenes from the life of Christ. The church also has stained glass windows created by the artist Maja Lisa Engelhardt.

In 1956 a thorough modernisation of the church was undertaken, and many features of the church were either repaired or replaced. After a fire in 2012 , Stoense church was closed for 2 years, while it was again restored. It was reopened in 2014.