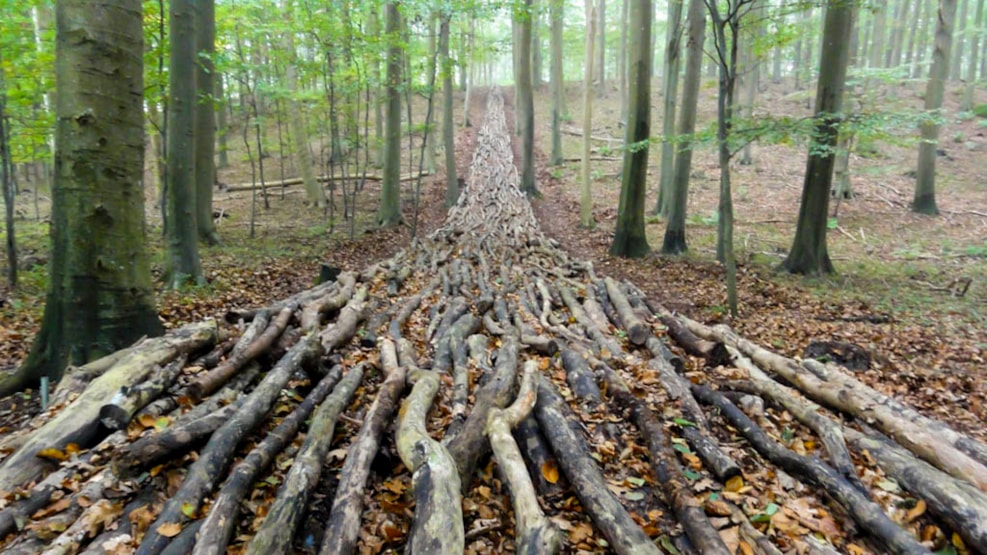 Mikael Hansen’s highway is actually not as long as it looks. By using the principles of perspective and the gradient of the hillside, the road is made to look like it is always the same width, although it actually becomes narrower and narrower.

Mikael Hansen created this work in 1995, but has returned to TICKON several times since to re-establish it. TICKON’s friends have also been given the task of making sure the branches follow the original line, removing fallen material and straightening the edges,

Prior to the work being installed here in TICKON, Mikael Hansen experimented with the design in the woods at Vesterskoven, near to his home in Albertslund. Always at the back of his mind was an image of one of the biggest motorway junctions in Denmark, which is close to where he lives.

He himself considers Natural Art/Land Art gives us the opportunity to create a new space within nature, a space that makes room for new interpretations of both the space itself and the materials used - in this case tree branches.

He explains that by illustrating a motorway in this work, the viewer may, paradoxically, feel more secure with something recognisable, such as a man-made road, than we do with nature’s own wilderness and chaos.

Mikael Hansen was born in Denmark in 1943. He trained as a graphic artist. Like Alfio Bonanno, he belongs amongst the pioneers within the genre of Land Art/Natural Art/Site Specific Art. He mainly works with materials found in nature, but he will also use other items if they are called for. If he does so they will only be used for a previously defined time limited period, after which they will be removed again.