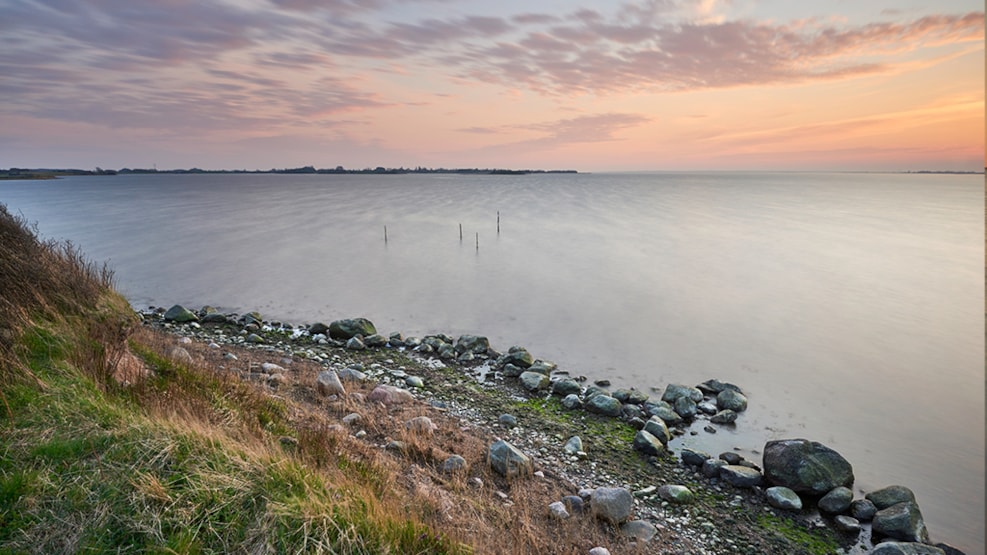 Stage 4 of Langeland Round begins 1km south of the small harbour at Ristinge, with its overnight shelters and toilets. The indented coastline from Ristinge, via Lindelse Nor, to Lindelse is dominated by three “nors”: Ristinge Nor (drained), Kølle Nor and Lindelse Nor.

The stage opens, in clear weather, with wonderful views of the islands of Ærø and Strynø, and from Bogø there is a breathtaking view over Lindelse Nor, a miniture version of the South Funen Archipelago.

Around Kølle Nor and Lindelse Nor it can be difficult to follow the coastline. In a number of places dense plantlife grows right down to the water’s edge, which is sometime swampy and almost impassable. An alternative is to leave the coast around one and a half kilometers from the starting point and follow farm tracks and country roads, vi Bogø, to Lindelse.

Bogø was formerly an island surrounded by the waters of Lindelse Nor before the southern part of the Nor was drained.

You walk along the coast (which can be difficult is water levels are high, but in places it is possible to walk along coastal dykes). After walking along the coast for around 2.5km you can head head east inland along a farm track, through the small settlement of Helsned Møllevænge, then further east along a footpath to the roads Køllevej, Helsnedvej, Kædebyvey and Langøvej, which you follow past Kædeby chapel. Later follow Bogøvej along Lindelse Nor to Lindelse.

Detour: You can make a detour to the charming little island of Langø by continuing north along Langøvej. The island is privately owned, but you walk over the causeway - and then back again. This detour adds around 5km to the route.

The stage ends at the striking church at Lindelse.