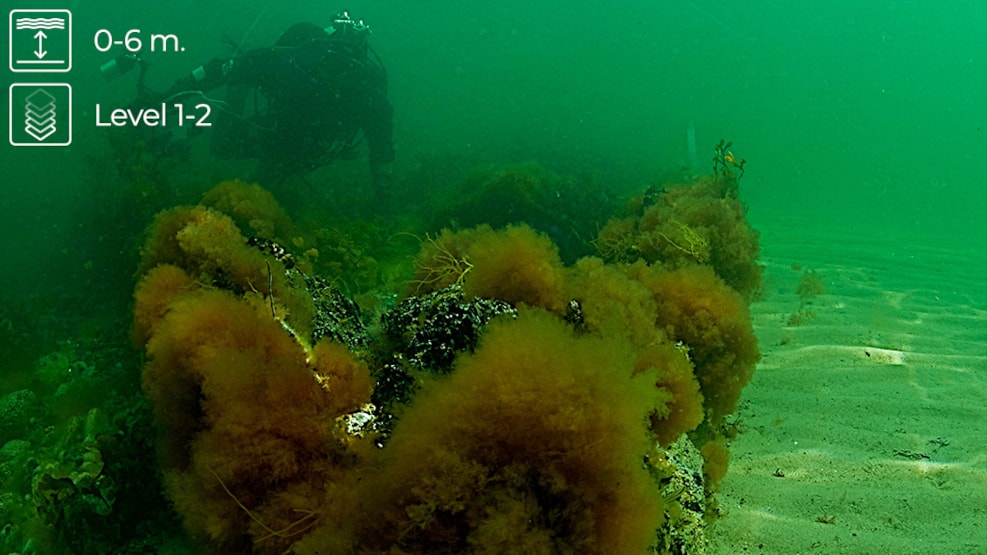 Wreck dive: The Bredbjerg Wreck - The southern part of the Langeland Belt

The Bredbjerg Wreck, also knowns as the Copper Nail Wreck, is one of the few wreck dives that can be done as a shore dive.

Location
Drive south along route 305 from Rudkøbing to Bagenkop. In Tryggelev turn left down Ourevej, which continues into Slåvænget. Stop in the parking place at the end of the road.

Safety
Avoid remaining on the surface as there is a lot of boat traffic. Make sure you are clearly displaying the A-flag. There are many boats sailing close to land all year round.

Currents: None
Photography: Good for macro and wide-angle shots.

About The Bredbjerg Wreck
The Bredbjerg, or the copper nail wreck as it is also known, is one of the few wreck dives that can be done as a shore dive. Wreck is perhaps a generous description, as only the “skeleton” of the ship; the ribs, part of the mast, and other bits of woodwork, remain. But if you are interested in wrecks and has a good eye for detail, this small wreck makes an excellent shore dive. The wreck is about 15m long and 3m wide. It protrudes about half a meter above the seabed and is easy to find.

You can locate the wreck by standing on the large manhole cover next to the road sign at the north end of car park and taking a bearing straight out into the Langelands Belt. Enter the water following the same bearing out from the road sign, and you will find a sewer pipe after swimming for about 20m. The wreck is located circa 75m from the shore in the same direction.

The copper nails that characterize the wreck are of considerable size and can be found here and there, still in situ. They have been the target of some souvenir-hunting divers in the past, but fortunately they did not succeed in removing all of the nails, so it is still possible to see why the wreck is known as “The Copper Nail Wreck”. Please do not remove any of the remaining nails, photograph them instead, and help prevent the destruction of this fine little coastal wreck.

There is plenty of life in and around the wreck and the sewer pipe, as these two structures act an artificial reef in an otherwise sandy desert. Goldsinny wrasse and butterfish can be found hiding in holes and crevices, while in many places sand eels and flounders can be seen on the sandy bottom. To the great delight of the resident crabs, anglers often dispose of the remains of cod they have caught here. The surrounding areas of sea grass are always home to large numbers of fry, and together with the various species of seaweed that grown on and around the wreck, they create a haven for marine life. The shallow depth gives almost unlimited bottom time, allowing photography to find many good subjects, primarily macro-shots. However if visibility is good it is also possible to “shoot” with a wide angle lens.

Because the wreck is lying in only 4m of water, sand cover over the wreck can vary. If you are lucky a storm might have uncovered a great deal of the wreck, but unfortunately the opposite might also be true.

There is not much to tell about the history of the ship and how it sank, as nobody is absolutely certain of what the ship was called and where it came from. A few sources name the ship as the “Inger of Skarhamn” which would suggest a Swedish origin, but most sources claim that it was a Norwegian ship built in the 1880s and that it sank here in the early 1900s.