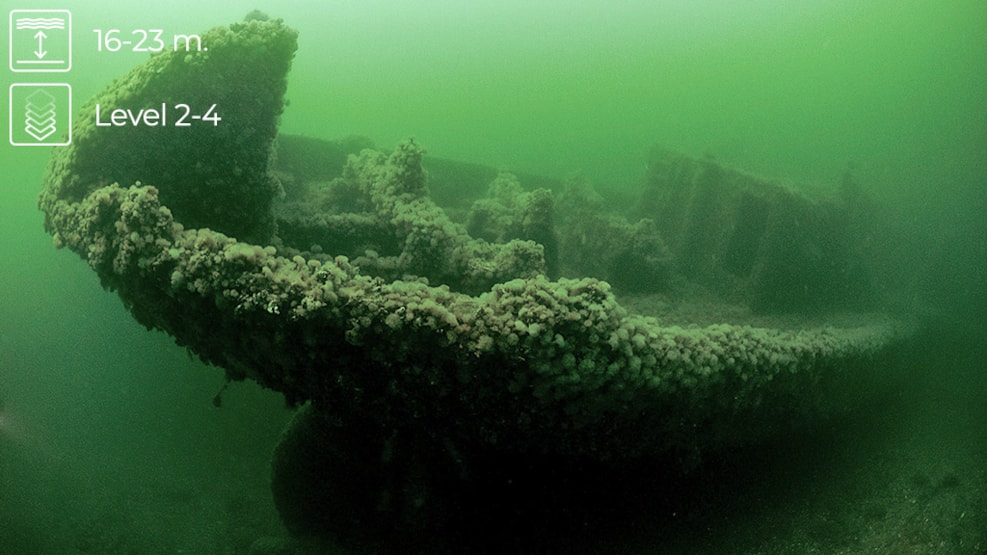 Wreck dive: The Island - The southern part of the Langeland Belt

This wreck lies at a depth of between 16 to 23m. You should start your dive with a tour along the impressive port side of the wreck, which rises 7 meters up from the seabed and is beautifully overgrown with sea-anemones and sea-squirts.

About The Island
On the 27th November 1939 the German armed trawler Island ran into a mine. It sank within a few minutes and 14 sailors lost their lives in the cold waters. The violent collision blew off the bow section, which now lies on its starboard side. Between this section and the remainder of the wreck you can see a chaos of twisted metal.

The wreck lies at a depth of between 16 to 23 meters, and the visibility around this wreck is often good. It is lying nearly upright on its keel, leaning slightly to starboard. The funnel and superstructure are lacking, but otherwise the wreck is intact.

You should start your dive with a tour along the impressive port side of the wreck, which rises 7 meters up from the seabed. It is beautifully overgrown with sea-anemones and sea-squirts and other small organisms and plants. Looking back over the wreck from the screw, which is still in-place, gives a good impression of the size of the ship. Afterwards, swim back over the wreck on the starboard side.

It is possible to penetrate the forward cargo hold, and generally The Island offers many interesting features to explore. The two masts lie across the ship on the starboard side, and the intact skylight at the back of the remains of the superstructure is also in good condition. It is possible to swim behind the large trawl-winch in front of the ship’s superstructure, and it makes a really good subject for photographers. You can swim around the whole wreck in a single dive, but after the first time you dive here you will certainly want to return.