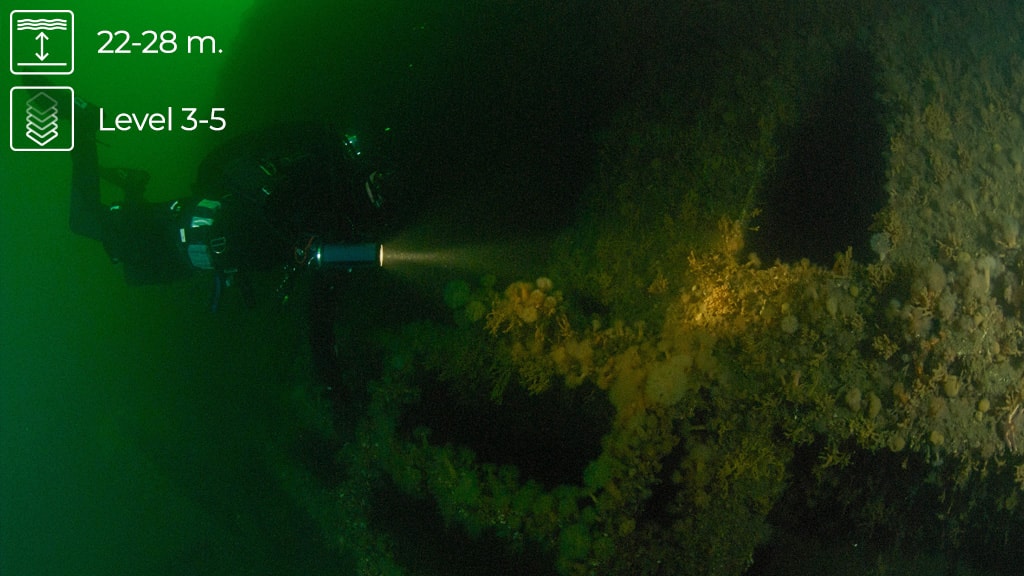 Wreck dive: M 36 / The Capsized - The southern part of the Langeland Belt

The wreck of the warship M36 lies so much on its starboard side that it’s keel is nearly pointing upwards. This wreck is therefore often referred to as “The Capsized”. The ship sank on 3rd May 1945.

About M 36 / The Capsized
The wreck of the warship M36 lies so much on its starboard side that it’s keel is nearly pointing upwards. This wreck is therefore often referred to as “The Capsized”. The ship sank on 3rd May 1945.

Normally when you reach this wreck you will be greeted by the magnificent sight of the 2 screws that are still sitting in situ. In Danish waters close to land you will not find many wrecks with screws of this size. After you have taken a good look at them continue along the port side of the ship. This will allow you to adjust your eyes to the wreck being nearly turned on it’s head before you start the dive in earnest.

One of the first things you will see is the deck mounted gun, which is fortunately still in place. It is beautifully overgrown, as is all the wreck, and can clearly be seen. Here you will already be able to see wreckage scattered on the soft muddy seabed.

Overall the ship is still in good condition, and there are many opportunities to penetrate into the wreck. It is a large wreck, and it can be difficult to orientate yourself in the upturned ship. If you do choose to penetrate, get to know the layout of wreck first, as it is tempting to make your way along some of the passageways.

Continue your dive along the port side, where you will find some small bulkhead doors, hatches and wholes that you can stick your head into to look around. If it is possible, explore the whole ship from the stern to the bows over 2 dives. Even if you only stop at the most obvious places of interest, you will reach no further than mid-ships before you need to head back to the surface. However dividing up the exploration of the ship like this can be seen as an advantage, as you quickly get a good overview of the ship. Around the ship you can still see it’s mine sweeping equipment, however at times this may be covered by mud, depending on the currents and wind directions in the period up to the dive.

Although there are many interesting details behind wheelhouse, spend your time exploring the wheelhouse itself and the front part of the wreck. The wheelhouse is partially buried and somewhat damaged, is situated around one third along the length of the ship. However, because of the many doors, hatches and windows you will see before reaching this point, you will probably not see this part of the ship on your first dive.

When you go get the chance to explore the front part of the ship you will find the ASDIC sonar, which makes a great subject for photographers.

On the way back a swim along the keel is an absolute must, as it gives a real sense of the scale of the vessel. But do keep a good eye on your computer, as time can run away with you as you explore the wrecks many details.

It can be an advantage to dive this wreck on nitrox, and do bring a camera, in case you are lucky enough to dive the wreck in good visibility. There are many good motives for photographers, and on sunny days plenty of light around the wreck. But don’t hesitate to dive here even if the visibility is less than 10m, as plenty of good photo- and normal dives have been made here when the visibility is less than perfect. Deco-buoys are obligatory here, because of the ship traffic and the strong currents that can sometimes be running here.