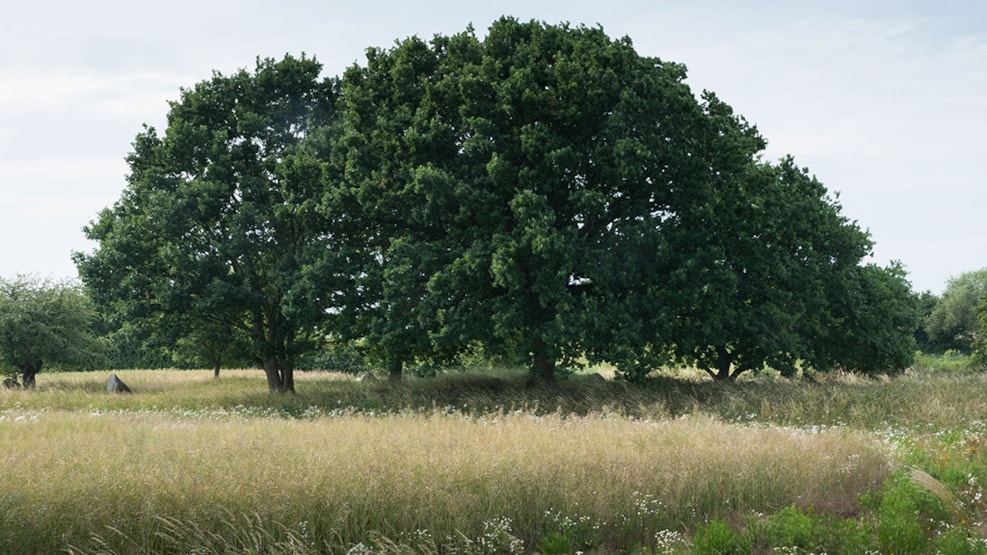 By the small road Almindingen, halfway between Tranekær and Tullebølle, there are two long dolmens less than 50 meters apart on the edge of a field.

The northern one is by far the largest, as much as 65 meters, and overgrown with several large trees. The southern one is today only 28 meters long, but its original extent is unknown as the curb stones at the western and eastern ends have been removed.

Both dolmens were already excavated in 1840 by Magister Wiborg at the request of Count Ahlefeldt-Laurvig at Tranekær. During the excavation, a skeleton and a wrist protector were found in each of the two chambers of the northern dolmen. Skeletal parts and flint tools were also found in the southern dolmen. The finds were submitted to the National Museum and subsequently given as a gift to the National Museum by the Count.

Like many ancient monuments, both  have gone through a lot. In 1875 it is noted that the chambers of the northern dolmen were covered with earth, and that plowing was made in the whole surface of the earth between the curbs, in 1947 that the surface is strongly perforated and has "remnants of two blasted chambers." About the southern dolmen, the traveler writes in 1947 that the dolmen should be restored. This happens in 1966, when Langelands Museum examines the dolmen and finds a large material of ceramic and flint around the mouths. After the excavation, the two chambers and the curb stones are restored. In 1981, a review of the finds reveals that among the Stone Age cases are fragments and parts of Baltic pottery from the Viking Age. The find probably originates from a pit south of the dolmen.

After the voyage, both ancient monuments are protected in 1948, as a result of the general protection law from 1937. However, this does not prevent a later owner from using the dolmens - for hunting purposes. In 1982, the traveler notes that in the western chamber of the southern dolmen "a low bench has emerged on two framed poles, presumably a sign that the chamber is used as a hunting lodge". And during a new visit in 1983, "a game-feeding machine made of an old tin barrel" is observed on the northern dolmen. Today, the hunting equipment has thankfully been removed!